[EN] From School to School : The Snake Game

In 2008, the secondary school of Sint Vincentius a Paulo, Gijzegem, Belgium, schose a theme for the year: ‘Without Borders’. We invited a large number of people, including Teeka Bhattarai, Nepalese development worker, who at that moment was pursuing a Master's degree in Pedagogy at Leuven University. Teeka, with a long experience in ecological agricultural projects, was convinced that sustainable changes can only be achieved through education. We organized an exhibition on the opening day and a lot of learning sessions for the students. From that moment and with the support of the then headmistress Mrs Hilde Van den Bossche, we started many years of cooperation between the school in Gijzegem and educational initiatives in Nepal.

That same school year, the sixth year of Humanities, Social and Technological Sciences and Science-Mathematics organized an initial exchange with Nepal. We introduced ourselves and our school through texts, videos and pictures and recorded English children's songs. One class wanted to design a game and thus a goose board game was created: 'the snake game'.

The principle is simple: a game in colourful fabrics, a dice, wooden pearls in different shapes and colours as pawns. When the children come to the odd boxes, they have to perform a movement. On box 1 they clap into the hands, on box three they stamp with their feet, on box five, they wave goodbye ... The ‘walk like an elephant' command is popular. In the even boxes they need to solve a question. The questions can be about any topic. They can also be linked to the subjects offered in Nepalese elementary schools such as English, Social Studies, Nepali, Science ... Because the ‘serious’ questions alternate with movements, the game remains fascinating for the children. In this way, the teacher can repeat the study material in a pleasant way.

The design of the snake game would undergo many changes. We brought the number of boxes back to 30 and we searched for variants. This year, the "snake" became a friendly caterpillar inspired by Eric Carle's children's book "The Very Hungry Caterpillar". 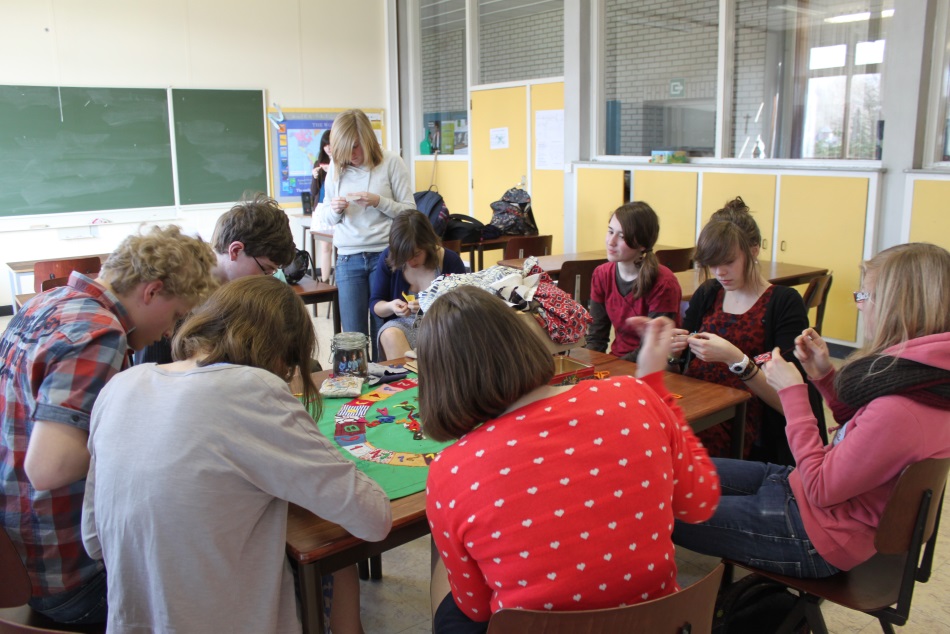 The whole class is at work

The following year, the snake game was complemented by a host of other educational games like flashcards, memory games, finger puppets, alphabet games ... Each year, five classes of the 6th year in English made an educational kit complete with didactic support, First in English, later also translated into Nepalese by the people of CEPP.
The pupils received information in word and images about Nepal, about the realisation of the Millennium Development Goals in Nepal and above all about (basic) education. Then they first wrote an essay "A day in the life of ..." describing one day in the life of a Nepalese child, a monk, an old woman ..., based on online research and books.
Then they designed and made game material that has to meet a number of conditions. It must be child-oriented, sustainable, environmentally friendly, culturally 'neutral', i.e. not Western, cheap and inspirational. SVI Gijzegem students are still designing and making educational game material, since 2008 ... and are thus sensitized around educational issues in the world. 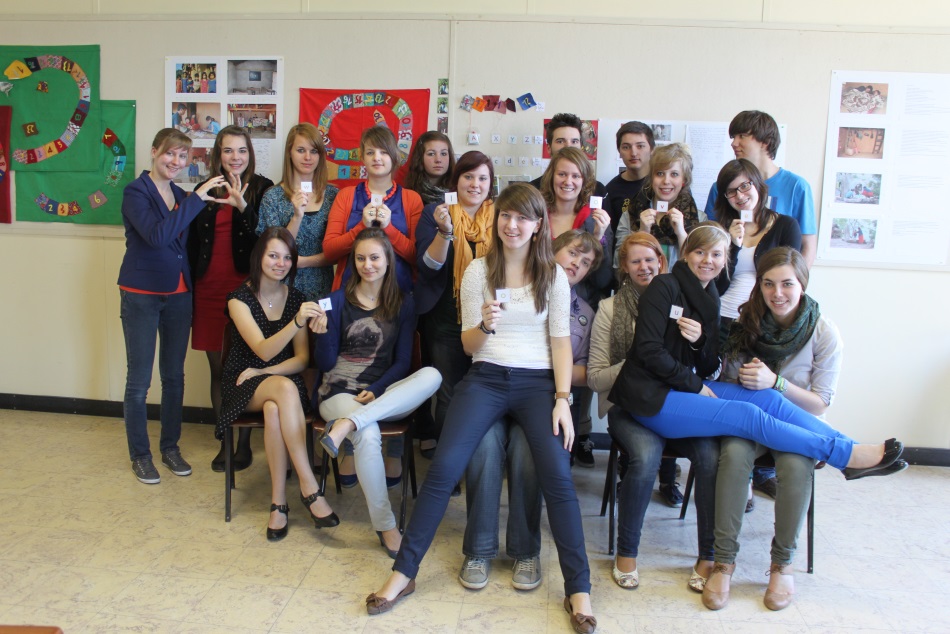 Information on the bulletin board, games in progress

The game material is not important in itself. What is important is that this material can focus the Nepalese teachers’ attention on the principle of ‘child-oriented education’. In our educational efforts, we find it crucial that the child is central, not the school books, not the teacher, not the exams. This is not evident in government schools in the remote countryside, because educational practice is often based on ‘repeating what the teacher says’ and ‘copying the textbook’. Nepalese teachers often received little teacher training, but their enthusiasm and commitment can increase the quality of education, which can make a difference for the well-being of the children and their future prospects. 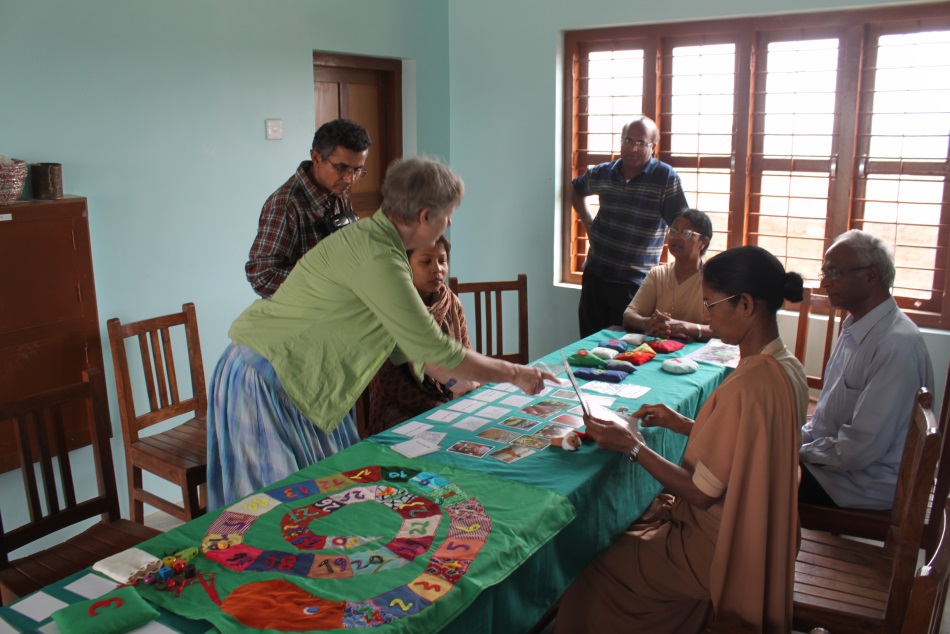 Discussing the use of the materials, in a boarding school for the children of the Chepang minority

We had no idea how popular the snake game would be. CEPP uses the game not only in primary schools but also in training activities for teachers, for the School Management Committees (a kind of parents & teachers group) and in education for young parents. Then the questions are not about school subjects, but about the organization of the school, about the right to education or about health and education issues concerning young children.
We ourselves also use the ‘snake game’ as a source of inspiration for the teachers during our teacher training. 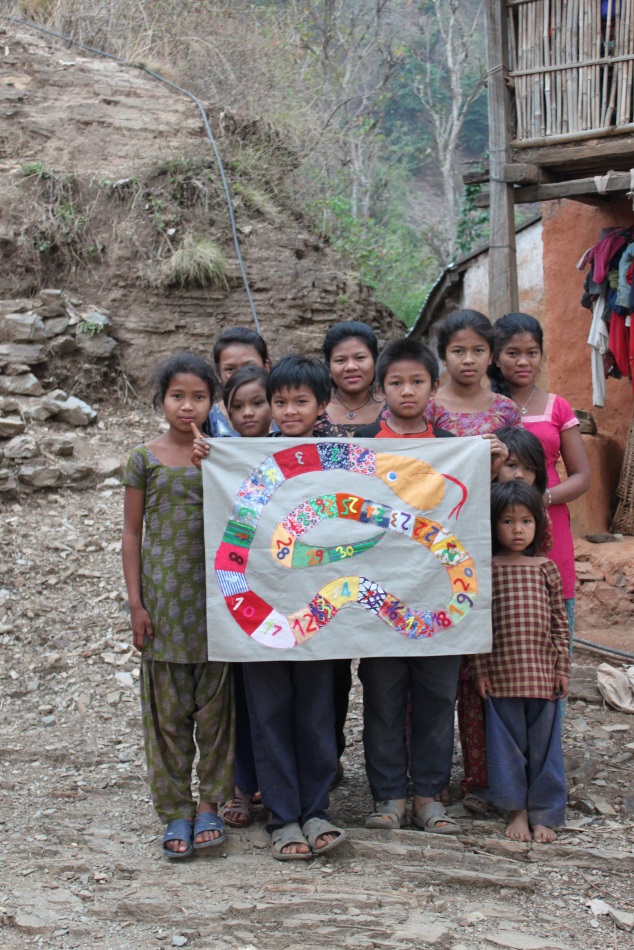 A playgroup in the Chepang hills around Manahari

This year we will again provide a number of three-day, intensive training courses, together with the CEPP team, from 19 October to 12 December. We are teachers of English, with experience in education and in Nepalese education (since 1985). We will work with the teachers and inspire each other. We will certainly not tell 'how it should be', but we want to encourage the teachers to discover their own possibilities and to realize their own ideas. We work in the area where CEPP operates: the Sindhuli-Rautahat-Makwanpur triangle (south of Kathmandu and east of Hetauda) and for the first time also in Dolakha District, which has been severely affected by the earthquakes. The trainings are very practical and take the reality of the Nepalese countryside into account. Here the infrastructure of the schools is weak, the teachers often receive little teacher training and almost no educational materials are used. Then creativity and resourcefulness, teacher’s self-esteem and trust in their own ability and in the talents of the children are of the utmost importance, and that is precisely what we want to emphasize with these training sessions.

Paul Beké and Carine Verleye,
Thanks to all the people who support CEPP, and especially to SVI Gijzegem and to the Free Elementary School of St. Vincentius Gijzegem.

If you consider CEPP's educational efforts valuable, your contribution to the BIKAS account
BE32 2200 7878 is more than welcome. As an entry, please mention 'Friends of Paul and Carine'.

A contribution of 40 euros or more entitles you to a tax certificate.
Thank you in the name of the Nepalese children!